HAZARD, Ky. — At the window of Hometown Pharmacy of Hazard, you’ll find pharmacist Tyler Wells, having a chat with his patients.

What You Need To Know

“One of the things I love to do as a pharmacist is get to know these patients,” Wells said.

For Wells, the more he knows about his patients, the better he can care for them.

“It kind of gives me a picture of what’s going on outside of just their medication profile,” he said. “That way I’m able to notice changes in a patient, especially if my patient may be an opioid patient.”

Wells has seen families struggle with opioid use disorder and pays attention when a patient’s demeanor changes or if they call to refill a few weeks early, he said.

Certain pills are locked in a safe, counted three times and run by a doctor before they’re dispensed. 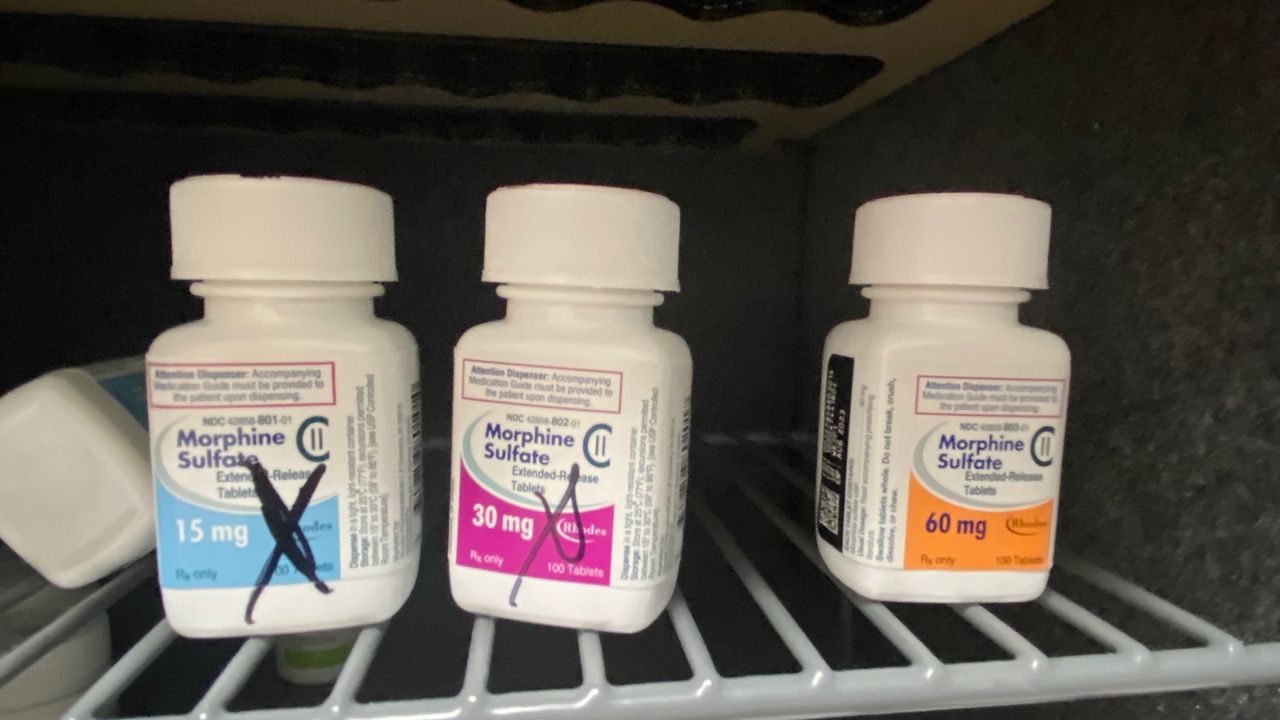 Morphine is one of several drugs that are locked in a safe at Hometown Pharmacy of Hazard. (Spectrum News 1/Erin Kelly)

“It is my responsibility to reach out and see (does) that patient really need to be on that strong of a drug, is it adequate, can their analgesia be controlled with maybe something less,” Wells said.

He is filling prescriptions for an overdose reversal drug at least four times a week, he said.

Officers at the Hazard Police Department average two to three calls a week where they may have to administer it, according to Chief Minor Allen.

“Previous this year, we had one week that we had nine overdoses in one week, three fatalities as a result,” he said.

“Our census is about 375 patients right now,” said Vanessa Napier, the facility administrator. “We are seeing anywhere from 40 to 50 new patients a month. I know that the area, there’s such a great need, because about 95% of the patients that we (have) come in are some type of, they have methamphetamine in their system and that’s just the patients who come forward.”

“We need counseling, we need patient education,” he said. “A lot of my patients, they don’t truly understand what that drug is doing to their body and the risk they run by taking more and more.”

He said pharmacists like him continue to look for ways to make a dent in the opioid epidemic.

“A lot of that is genuinely just caring for the patients that you’re providing for.”

At the end of the month, a new law goes into effect that supporters say will help those impacted by the opioid crisis.

Some of the money from settlements related to opioid manufacturing or distribution will go to local governments.

The funds can be used for things like recovery services, the cost of administering overdose-reversal drugs, and efforts to prevent overprescribing opioids.

“There’s so many things that tie into the opioid epidemic and so the Legislature really just wanted to start focusing where can we make a difference, what will make an impact,” said Rep. Derek Lewis (R, London), who owns Hometown Pharmacy of Hazard and two other pharmacies. “Damage has been done, so now we’re recovering, and it’s not just Eastern Kentucky, it’s all over.”